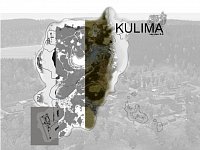 Kulima island by Acutres. I'm uploading this addons on Steam Workshop with permission of Acutres.

Island Kulima is fictitious. Area is ~ 37Km2 (10×10km map). Belongs to Manani archipelago. The other two islands are: Baldarife a Zlarote. In the distant past, the central island twisted several meteorites, which resulted in their separation and the creation of islands. Influence meteor shower is visible even now, not only resulting lake Kulima, under which the island was named, but also crater, that hides a labyrinth of caves. A large part of the island is covered with forest. The country is fertile and suitable for agriculture, but people are more used for subsistence fishing. On the island there are two villages Resma and Mina. There are several settlements, the largest one Biglibi and Zaplna. Dominating the northern part of the island is the ruins of the castle Barbusa, whose origins date back to 2 13th century. Airport, which is south of the island has an armed faction that has the island, the indignation of indigenous peoples, other plans.

You're taking role of SBS squadleader and your objective is to infiltrate enemy compound, locate any enemy intel and get out before reinforcements arrive.

Weather is randomized with every mission start so if it isn't what you expected just reload the mission from beginning.

Every feedback no matter if its about scripting, translation, difficulty etc. is much appreciated! I need it for future missions and so I can edit this one to your liking.

Thanks and I hope you'll enjoy it.

ACR_A3 - Army of the Czech Republic

This mod contains various infantry units, vehicles and equipment. It does not include ported vehicles and weapons, for that you have to use it with ACR_A3_CUP and CUP.

This project is open source and all the source can be found on GitHub – https://gitlab.com/ascz/acr_a3 You can contribute, create issues, requests and so on. But please do not re-release or alter any part of our mod without our permission.

gia Marina is under zombie attack and you have a very important mission.