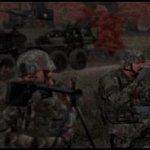 Chernarus, 2015. After finally stabilizing their country after 2009 crisis, chernarussian government decided to join EU. The country is – of course – divided into two camps by their opinoins on EU. Those who want to join the Union claim that this is the only way to prevent the history from repeating itself, those who want to stay out of the Union point out EU's failures, recent economical crisis, disunity in some crucial questions and other disadvantages. Unfortunately it's not far from words to weapons in this country. Nationalists, who couldn't accept the accessing process, joined together on the remnants of the old NAPA militias. And the first dead came soon. Czecho-slovak battlegroup, which was active at this time, was called for immediate action. As a leader of infantry squad, your mission is to coordinate attack of all teams and breach enemy's improvised defences. If you succeed, reinforcements and much needed humanitarian aid will soon arrive at nearby airport. If you fail…