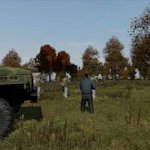 In September 2008 ChDKZ began with massive offensive in Chernarus. CDF forces weren't able to hold their positions and now ChDKZ forces, supported by Russia, control almost all country except the southern coast, including the two biggest cities the in region – Chernogorsk and Elektrozavodsk. Chief of the ChDKZ Lopotev wants to conquer them before UN will decide to send American forces to Chernarus. The next target is Chernogorsk, where your girlfriend lives…