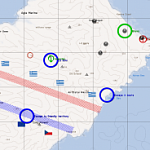 Description: This is the first mission from the series called Operation Gold Horizon and your current task is to kill enemy general and escape to friendly territory.

Mission Briefing: Czech forces supported by expeditionary forces from other EU countries are waging war with Greece forces. War for the Stratis island is only one small battle in huge war and you play important role in this battle. Our forces are currently holding south part of the Island and we were in the defensive for the last few weeks. But now, with the new reinforcements we can go offensive and your squad is the first part of this offensive. You have to assasinate enemy general. He will arrive at Kamimo military base at 8:12. Our littlebird will insert you deep inside enemy territory at 0:10 so you have 8 hours to get into sniper position Bravo. From there you will have good overwatch on Kamino. After general´s dead you have to escape from enemy territory. You can walk/ride to friendly territory at south, escape in boat or call a helicopter at Zulu LZ. Fastest way is definietly a helicopter, but we can garantee helicopter will be able to land. Same with boats – we cant garantee they will be there.

Primary objectives: Reach bravo Kill the general – Its quite hard shot, so its suggestet to take a skilled sniper with you. IF you fail to assasinate the general you CAN continue to next checkpoint → Escape. Escape